The latest installment in my ever-increasing sphere of Mam-guilt; is that Ellis doesn’t ‘do’ anything. I mean; obviously he does loads. He says ‘Hey!’ lots, he crawls, he nearly walks, he claps, he laughs, he eats…all of that day-to-day shizzle; but he doesn’t have any ‘organised’ fun. This has led me to the wider pressing issue which is; ‘Am I giving Ellis a really substandard childhood in comparison to his brothers and will I have to explain myself to his psychologist one day?’

By the time Dylan (hallowed first-born) was seven weeks old he was enrolled in a program of baby activities which were undoubtedly going to ensure he graduated with a first from Oxford in 20 years time (a year earlier than his peers obvs because he was going to be an actual genius).

This program included fucking outrageously expensive swimming lessons where you basically paid twelve pounds for 25 minutes in a tepid pool singing ‘Five Little Ducks’ then dunked them under the water when the evil swimming teacher commanded; even though it nearly broke your heart to do it. But I really wanted him to ‘get comfortable’ with the water… it was so important to his onward development.

Jonah also got to go to these overpriced splash/scream-a-thons; but by that point it was mainly just an excuse to do something with my friend and we spent the whole class talking to each other and getting tutted at by the teacher.

Ellis? Well… Ellis doesn’t go swimming. I tell myself that it’s fine really because he goes in the bath with at least one brother every night, which is almost the same as a lesson isn’t it? I’ve made a mental note to sing ‘Five Little Ducks’ to him at some point… job’s a good ‘un.

Both Dylan and Jonah got to go to local singing/activity groups. I paid lots of money to sit in a circle with other middle-class Mothers and prodded my child to stay awake and ‘be stimulated’ even though he was clearly exhausted. But you see it was so important for the development of his vocabulary, confidence building and social skills.

Ellis doesn’t know nursery rhymes exist. The boys sing a lot of Queen, The Killers and Mumford & Sons to him round the house so he’s going to have an eclectic musical taste which will just not involve Baa Baa Black Sheep.

I’ve tried, I’ve really tried with this one. I’ve had my shoes on and car keys in hand honestly… but then it suddenly hits me; ‘I cannot bring myself to sit on a hard church-hall floor and sing ‘Wind The Fucking Bobbin Up’ with a room-full of strangers. Not again.’

Nope. Nursery rhymes can be consigned to the box of things little Ellis will never know about. Other things in the box are:

When Ellis starts school then obviously he will hear about these things but as a family we will be well-prepped for this. We will smile and shake our heads and tell him these things don’t really exist. No! They are myths Ellis… you know; like unicorns and Santa.

With Dylan I was very strict on who could and could not babysit him. Truthfully, it was only my Mam. And despite the fact that she had raised two children safely to adulthood herself, I found it necessary to leave her two A4 pages of instructions. No detail was too small to mention. Nothing was overlooked. Hell hath no fury like a first-time Mother who finds out her child has been fed at 1.05pm when the INSTRUCTIONS stated 1pm precisely.

By the time Jonah was born, I had loosened up a smidge and now other family members could be trusted to babysit. Sometimes I even gave verbal, rather than written instructions! Check me out.

Ellis? Ah well. You see, I realised pretty sharpish after having him that it’s way harder to palm off three kids than two. People are scared of having more kids than hands. I had two choices; go back to the ‘My Mother Only’ rule… or drastically lower my standards. Now, my Mam is a busy woman, she still works full time and it seemed unfair to announce to her that she was back to being my only babysitter.

So yes; I went for option 2: Anyone who will have them.

They don’t need a DBS. They don’t need to be legally an adult. It’s preferable if they’re sober but not a deal-breaker. There are now no written or verbal instructions as I leave the house (due to the sheer excitement of my imminent escape). I simply shout over my shoulder that I don’t know what time I’ll be back but the babysitter should only call if there’s significant blood-loss or an obviously missing limb on one of them.

All of Dylan’s food was lovingly handmade by me. Any Sunday afternoon you could find me in the kitchen surrounded by broccoli, sweet potato, asparagus and enough Annabel Karmel books to bore even the most enthusiastic rookie Mum. I would chop and steam (so important to keep all the nutrients in for my little prince), stir and blend. Then I would spoon them into ice cube trays for the week ahead and feel like such a good mother.

As the week went on I would defrost these little domes and feed them to darling Dylan. And when I say ‘feed’ them I mean I would chase him around the kitchen aiming to get a spoon past his pursed lips whilst openly sobbing ‘Please sweetheart please! One spoonful for Mammy. IT”S ORGANIC!!!’

Again, I was a tad more relaxed with Jonah. He got way more treats and way less force-fed courgette.

Ellis? Ellis eats whatever I give him. No complaints, no pursed lips. He’s just grateful that I’ve remembered he needs to eat.

Dylan drank filtered water. Jonah drank no-added sugar squash. Ellis gets the remnants of my cuppa in his bottle.*** 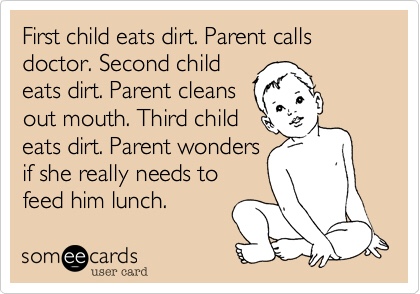 So, back to my original question: is Ellis the unlucky recipient of a shitty substandard childhood?

You know; I’m going to say no.

Remember that old saying ‘What you don’t know doesn’t hurt you’? Well there you go!

He doesn’t know about all these wonderful ‘myths’. The swimming and the singalongs and the cartoons and the organic grub… But he does know about laughing hysterically at his crazy big brothers. He knows about being the object of their complete and utter adoration. He knows about chocolate buttons because despite only being ten months old; the food rules are relaxed to say the least in this house. And yes; he knows all about Joe Hart’s greatest saves and could identify Football’s Hottest Wife (Emma Rhys-Jones, wife of Gareth Bale, in Jonah’s humble opinion) before he was even six months old.

I think he’ll do ok.

***He doesn’t – I’m just playing up to the Northern stereotype for the Southerners who read this blog. I’d hate to disappoint you. If it adds something to the image you can picture him sitting in his buggy with a sausage roll in one hand and the bottle of tea in the other.

View all posts by pearlsofkiddom

3 thoughts on “The Tragic Neglect of the Third Child (What’s your name again?)”